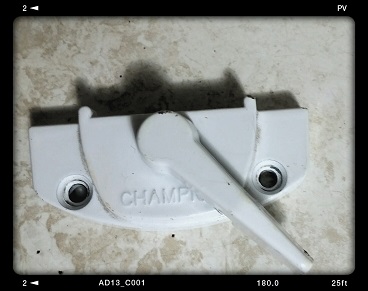 My sister asked me if our Dad was haunting me now since I am alone in the house these days. My response had been that he haunted me enough when he was alive. To understand my comment one would have to understand my sense of humor. She didn’t and most won’t. At any rate I now think he is haunting me with these damn window locks. Or it could just be my way of well, it sounded like a good idea at the time,  mentality.

These damn locks are falling apart at a rate that rivals anything I can think of. And then I had the bright idea to use super glue to try and hold one together. Surely I only dropped a dab on the locking part, and the lever mechanism was spared. Right. And in an attempt to separate the two from each other with a hammer –  I now have a bit of a swollen finger. But fear not. If you hit your finger hard enough with a hammer it goes numb quickly.

Soon I will be making a trip to Home Depot for a multitude of replacement locks. And somewhere in some alternate reality my Dad is sitting with a grin on his face saying yep,  I tried the same thing once.